GET TO KNOW THE NORTHWEST ARKANSAS JAZZ SOCIETY

For the past 31 years, the Northwest Arkansas Jazz Society (NAJS) has been a community leader in presenting world-class jazz performers in venues across Northwest Arkansas. We're a non-profit membership organization that seeks to present, preserve, promote, and celebrate the great American art form known as jazz through education, concert presentation, and artist promotion.

Our operating funds are secured through membership fees, grants, ticket sales, and merchandise sales. We rely on the generosity of the Northwest Arkansas community and are grateful for the continued support of many. Today, our work of celebrating jazz is stronger than ever. We seek to find innovative ways to engage with new and diverse audiences and keep jazz alive and well. 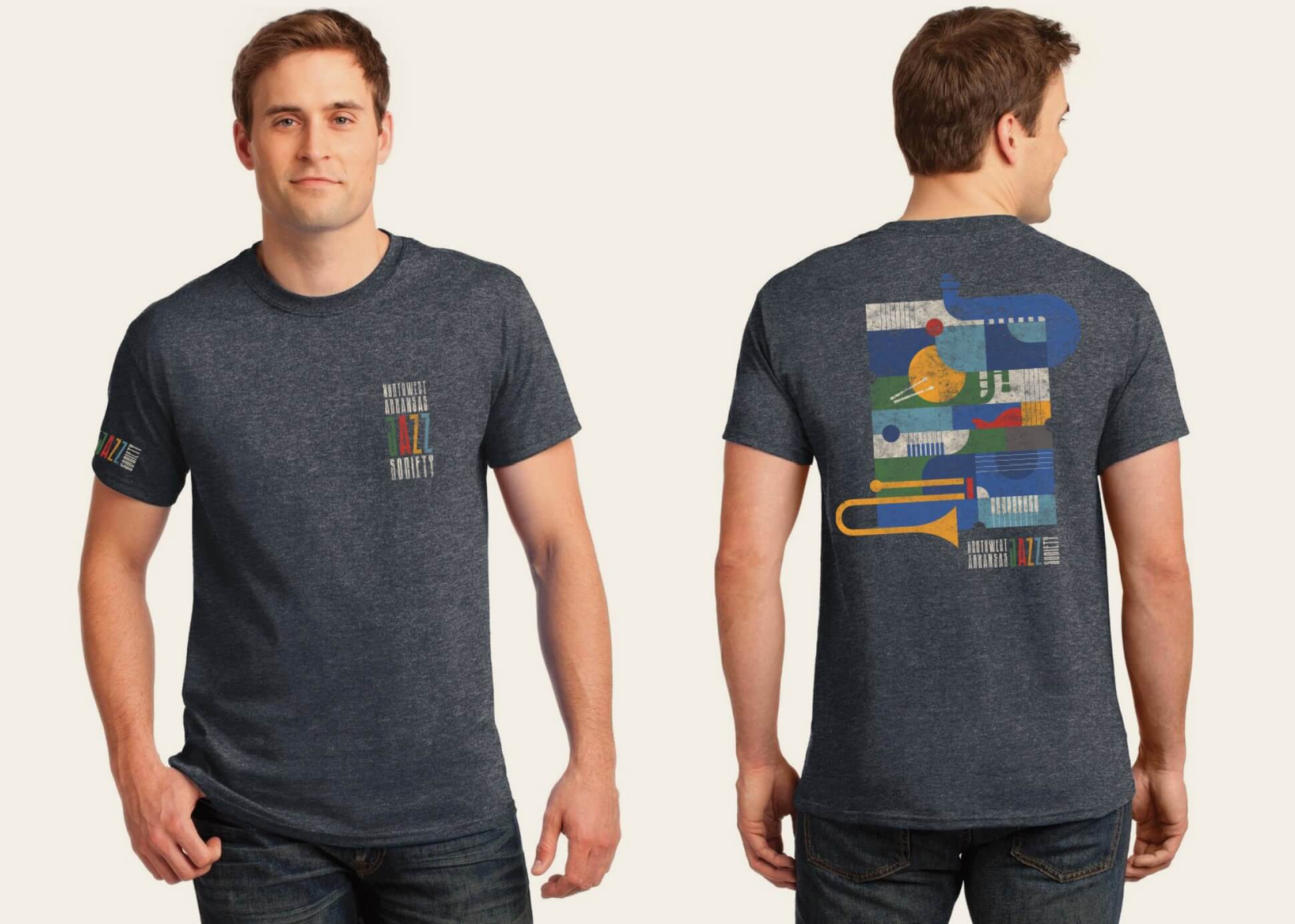 A History of WorLd-Class Presentations

Bringing Jazz to NWA VENUES including...

Robert's life in music for over four decades has forged a permanent presence for jazz within the Northwest Arkansas cultural landscape.

Most recently, with the support of the Walton Family Foundation and Walton Arts Center, Robert has launched the "Jazz Education Initiative". The Initiative cultivates jazz appreciation to sustain the jazz art form through education programs integrating school performance, workshops, artists-in-residency, and public performance opportunities. The flagship of the program is the Jazz All-Stars Youth Ensemble.

In 2010 he received the Arkansas Governor's Arts Award for Community Development and in 2016 he was the recipient of the Jazz Journalist Association Hero Award.

Jacob is a graduate student at the University of Montana, studying theatre directing. He has spent more than six years as a professional web content developer, assisting nonprofits and businesses in building their online presence.

Jacob and his wonderful wife Brianne worked at First United Presbyterian Church in Fayetteville for more than five years before moving to Missoula, Montana where they live with their two dogs.

Graham is thrilled to join NAJS as Executive Director. He returned to Northwest Arkansas in 2020, retiring after a thirty-five year career in higher education. He had served primarily as a chief alumni officer overseeing public and private university alumni associations, including at Vanderbilt University, the University of Arkansas, and Ohio University.

An active jazz vocalist and trombonist, he has appeared with the Nashville Jazz Workshop, Fayetteville Jazz Collective, Jazz Spoken Here, and Swing Central. Early in his career, he toured and recorded with Grammy-award winning vocal ensemble The Gregg Smith Singers. Graham has performed more than 25 leading roles in musical theater and opera, and was an award-winning whistler featured in the 2005 documentary film "Pucker Up: the Fine Art of Whistling."

Graham grew up near New York City, and went to college and lived for 30 years in Ithaca, NY. His wife, Tina, is originally from Morrisville, Vermont, near Stowe. They have two children and two grandkids spread between Springdale, AR and Nashville.

Kay Ellen is a senior accountant (CPA) specializing in utility accounting. She spent 18 years with Ozarks Electric, retiring in 2020. Kay Ellen spent two years as a CPA with John Ervin, preparing individual and corporate income tax returns, completing Sales and Use Tax Returns, and performing audits of non profits and for profit businesses. She has maintained memberships with AICPA, Arkansas Society of CPAs, NW Chapter ASCPA (where she served as VP and President), and the National Society of Accountants for Cooperatives.

Kay Ellen was a member of the NWA Jazz Society for many years before joining as the Financial Manager in 2013.

Kay Ellen and her husband Tom have three children and six grandchildren.

NAJS Board of Directors

Andy resides in Bentonville and has earned a PhD in "life on the road" – spending 50+ years in entertainment, musical, theatrical, tourism and hospitality production, and artist and event management. He has numerous gold records and spent 12+ years as the tour manager for REO Speedwagon, the Amazing Rhythm Aces, Muscle Shoals Records and All Stars, and Levon Helm; and over 20 + years as an executive director in performing facility management in Illinois, Kansas, Louisiana, and Tennessee in the USA, and Sydney, Australia. He has produced literally thousands of events and multiple television specials including Farm Aid I, Hard Rock Rockfests '99 and 2000, and the Montreux Jazz Festival Tour as well as serving as a consultant to the Sydney 2000 and Salt Lake 2002 Winter Olympics. He is currently the CEO of Ozark Production Services, LLC and Mesa Verde, LLC and an active 35+ year member of IAVM. He is an avid supporter of the performing arts, and his many hobbies include hunting and fly fishing, dogs, horses, cycling, motorcycling, golf, food, wine, live music/theater/arts, and literature. He has one child, and two grandchildren.

A resident of Fayetteville and graduate of the University of Arkansas School of Nursing. Marty worked as a financial advisor with Wells Fargo Advisors and retired in 2019. She is a jazz lover who has been a member of the NWA Jazz Society since its inception. Her first career was as a registered nurse and became a stockbroker with AG Edwards. She has served on the boards of the Fayetteville Library, Drake Field, and Ozark Literacy Council.

He is a prolific jazz composer and arranger of jazz for ensembles at various levels, and is an active performer of classical, jazz and pop with numerous ensembles throughout the region.

Margaret was the first African American president of the Arkansas Foreign Language Teachers Association, the AR Division and Fayetteville Branch of the American Association of University Women, Fayetteville Business and Professional Women, the Iota chapter of Delta Kappa Gamma, the International Society for Key Women Educators, and the Arkansas-East Bolivia Chapter of Partners of the Americas. She spearheaded the chartering of the Phi Alpha Omega Chapter of the Alpha Kappa Alpha Sorority, Inc. and served as its founding president.

Margaret's numerous rewards include a MLK Lifetime Achievement Award. In 2019, a UA dormitory was named Margaret Clark Hall. The Washington County Historical Society named her "Citizen of the Year" in 2020, and in 2022 she will be inducted into the AR Women's Hall of Fame.

Margaret's love for jazz began as a teenager in NYC where she was able to see many of the greats play live. She now lives in Fayetteville with her beloved dog, Mia.

Patrick is Professor in the Department of Political Science at the University of Arkansas, where his specialty is international relations. He is an avid listener of music, especially jazz. He enjoys long bike rides on the Greenway, is willing to try adventurous foods, and savor the experiences of many travels elsewhere. He has lived in Saudi Arabia, Lebanon, and Singapore, and appreciate opportunities to reach out across cultures and classes. As a Professor, he works with a broad and diverse set of audiences, and wants to build and diversify the audience for jazz. By reaching out to different communities in our region, we can not only serve them, but they can inform our musical genres and encourage the performance of jazz that stretches our boundaries.

A resident of Fayetteville and a graduate of the Sam M. Walton College of Business at the University of Arkansas, Tim has been with First Western Financial for ten years and currently serves as Vice President / Financial Advisor. He is a supporter of the arts and a believer in music's ability to nourish kindness, unity, and health.

Jerry Moye enjoyed a 40 year career in the poultry business. An opportunity with Tyson Foods brought he and his family to NW Arkansas in 1993. He retired in 2016, having spent the previous 10 years as Tyson Group VP and President of Cobb-Vantress, Inc. in Siloam Springs. He remains active in the industry through board positions with USPOULTRY Foundation, and Hendrix Genetics, a multi-species genetic company based in Boxmeer, Netherlands.

Jerry has been involved in several community organizations including, Siloam Springs Chamber of Commerce, NW AR JDRF Board, Keep Dollars in Benton County, and currently sits on the board for Circle of Life Hospice.

Jerry is originally from northern New Jersey, just across the Hudson from NYC. His wife, Cherie, is also from the east coast just outside of Washington DC. They have two children, and four beautiful granddaughters spread between Rogers, AR and KCMO.

Darren is a drummer, founding member of the Fayetteville Jazz Collective, recording engineer, and vice-president of Springdale Acoustics, Inc. He has a B.A. in Physics from the University of Arkansas and has been active in the Northwest Arkansas music scene for the past 40 years.

Janice lives in Fayetteville and retired in 2021 as a financial consultant, Associate Vice President, Investments, with Wells Fargo Investments. She has a BA in general business from Texas Tech U, and is a member of PEO (non-profit with emphasis on girls education), and is a Toys for Tots volunteer. She has two sons and one granddaughter.

Originally from Seattle, Barbara is a serial entrepreneur and former New York Times blogger. She moved to Bella Vista from Seattle with her family in 2003. While she grew up playing classical piano, Barbara enjoyed playing jazz standards with her grandfather, a professional jazz saxophonist. Her two sons are both jazz musicians, and members of the NAJS Jazz All-Star Youth Ensemble. She is the co-founder of Allan Taylor & Co. business brokerage in Bentonville.

In 2009, Tod and his partner Jackie moved from Dallas to Fayetteville. Jackie took a leadership role with Walmart, Inc. and Tod continued his law practice. Fayetteville impressed them from the start. It had an established Jazz Society, a burgeoning professional theater, a symphonic orchestra, an extraordinary library, and a citizenry that puts and keeps this all together. Within two years of moving here, Tod joined the Board of Directors for TheatreSquared and The Symphony of Northwest Arkansas.